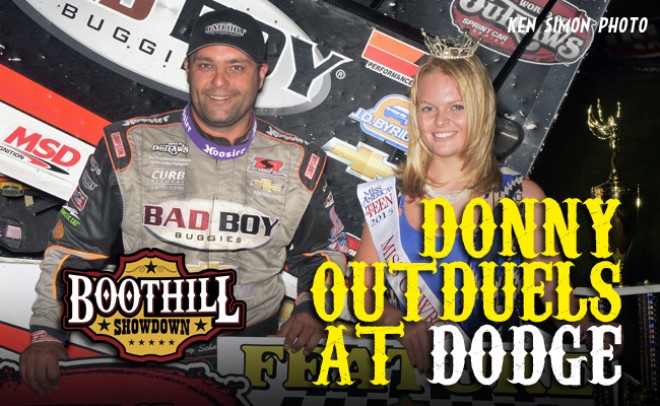 DODGE CITY, Kan. – July 4, 2015 – After coming just short of a win the night before, Donny Schatz dominated night two of the Boot Hill Showdown at Dodge City Raceway Park on Saturday night and scored his 19th World of Outlaws Sprint Car Series victory of the season.

“It feels good to get back to victory lane,” Schatz said. “This race track was completely different tonight. I didn’t know what was going to happen. It got so fast on the bottom last night and I didn’t know if it was going to hold up there or not. But wow, it was lightning fast around the top.”

Schatz started on the front row with Jason Sides, the previous night’s winner. Schatz had the lead in his No. 15 Bad Boy Buggies car by the time the two drivers hit turn one. A caution flag flew early as Joey Saldana was forced up the track. When the race returned to green Schatz maintained his lead.

The restart proved pivotal as Sides stumbled and held up the bottom line while Schatz and those behind him surged forward. When the field came back around, Schatz led McMahan and Jason Johnson. As Schatz worked his way through traffic in the closing laps, McMahan tried to run him down but was unsuccessful.

“Starting on the outside really helped tonight getting the jump on (Jason Sides),” Schatz said. “Had a really good car. It was awful tight there most of the race but that’s a good thing for me. I try to do my best and tonight it got us a win.”

After a season so far that has been up and down, McMahan said the second place finish felt good for he and his CJB Motorsports team. He credited his crew chief Barry Jackson and his team members for working hard night in and night out to overcome bad luck and find their stride.

“We’ve been working every day and Barry has been working every day trying to figure out what it is and I think we found some things on our CJB racecar tonight,” McMahan said. “Our pill draw hasn’t been the greatest, we’ve been qualifying just outside that front row or not in that good spot to make the dash and then you’ve got to start so far back. And then you’ve got to chase guys like Donny down. I’m just happy to actually be in the same race he was tonight. He didn’t get away from us – lap traffic was pretty tricky.”

After a nearly three month hiatus from the series following an injury at Placerville Speedway in April, Jason Johnson proved yet again tonight that he is back in old form. The reigning American Sprint Car Series champion, who is making his first full campaign with the Outlaws this season, started on the pole and finished in the top five on night one of the Boot Hill Showdown and then closed out the weekend on Saturday with a podium finish in third.

Johnson said the finish means a lot for his No. 41 Priority Aviation/Mesilla Valley Transportation team.

“Even though I was out, my guys worked their tails off and using the different drivers throughout the time I was out, they capitalized on the good things that we learned from each guy,” Johnson said. “I’m still the same driver I was three months ago but these guys have advanced really far. I can’t say enough about Phillip Dietz our crew chief and (crew members) Cole and Blaine, they’re doing a good job. The team is gelling and we’re surrounded by great people… I want to thank everybody for their support while I was out and I’m happy to be back.”

The World of Outlaws Sprint Car Series return to action next weekend, July 11 and 12 at Cedar Lake Speedway for the two-day Cedar Lake Outlaw Sprint Car Showdown. For more information on the event and to learn how to purchase tickets, visit http://woosprint.com/cedar-lake-speedway.

RACE NOTES: Joey Saldana was the night’s fast qualifier after a lap of 12.480. It was the ninth quick time of the season for Saldana who is the leading qualifier… Last night’s winner Jason Sides won the Dash and started on the feature pole… Kevin Swindell was the night’s KSE Racing Hard Charger, advancing six positions to finish in 14th… Donny Schatz’s win tonight was his 19th of the season and third career win at Dodge City.