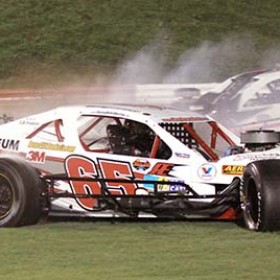 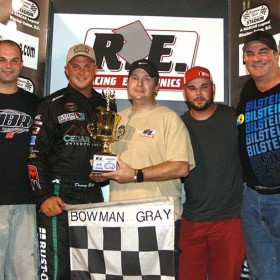 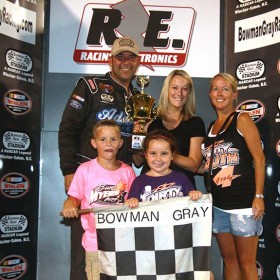 (Bowman Gray Stadium, Winston-Salem, NC) On Friday at Bowman Gray Stadium, Jason Myers continued his hot streak in what has turned out to be his best season ever. But he was overshadowed by the roller-coaster ride that Danny
Bohn took on Friday night.
Myers, a resident of Walnut Cove, was the fastest qualifier yet again at the Stadium – his eighth pole of the 2015 season. Starting outside of him in the first race for the Brad’s Golf Cars Modified Series was Danny Bohn of Freehold,
NJ. Bohn was the champion last year but left to pursue his career, returning occasionally to his old stomping grounds.
Myers and Bohn battled side by side during the initial start but Myers eventually powered into the lead. More cautions soon after took their toll on Jason Myers. Not only did he have to defend his lead more often, but his car was
losing speed.
“We were good in that first race until about halfway – and once the tires cooled off on that long caution, the car just went away,” said Myers. Bohn took advantage of the situation and put Myers to the test, repeatedly banging
Myers’s rear bumper.
But right behind Bohn was Burt Myers, who wasn’t too happy about Bohn’s treatment of brother Jason. Myers delivered a stiff shot to Bohn to send him spinning.
“He was flailing on Jason, it would jam us up, and I’d get nailed. And then he was trying to overdrive his car to get to Jason. When he did, he slid out – and I got my nose in there,” said Burt Myers. “Some people can dish it out and
can’t take it.”
Bohn saw it differently. “Burt was mad I was roughing up his brother, but I didn’t spin him out. I know how hard to hit somebody not to spin them out,” said Bohn. “I was hoping maybe Jason would slip up, and I’d get a hole. But I
guess his brother didn’t like it, so he drove down in turn three and cleaned me out.”
Jason Myers went on to take the checkered with Burt Myers finishing behind him in second. “I earned this sucker tonight. I had my hands full,” said Jason Myers. “I drove that last 25 laps probably harder than I’ve driven 25 over
here in a long time.”
Redemption did come for Bohn, though. The “Madhouse Scramble” put him sixth in the lineup for the start of the second race, and in short order Bohn made his way up to challenge Ronnie Clifton of Walkertown for the lead.
Clifton held strong but ended up losing control, perhaps due to track conditions, later in the race.
Bohn took over the lead, held off Chris Fleming of Mount Airy, and went on to grab the checkered. Fleming finished in second.
In the McDowell Heating & Air Stadium Stock Series, Brandon Brendle of Winston-Salem brought home the win.
Connor Pyle, Chase Purdy, Joe Ryan Osborne, and Dave Rapelle won in the Legends races. Clay Thompson and Ashton Higgins took home Bandolero wins, with John Barrow winning for the East Coast Flathead Fords.
The action continues tonight at the Madhouse with the Strutmasters.com 199 for the NASCAR Whelen Southern Modified Tour, plus racing for the Farm Bureau Insurance Sportsman Series and the Q104.1 New Country Street Stock
Series. Admission for this special event is just twelve dollars.
The gates open at 6:00, and the first race begins at 8:00 PM tonight. Ticket prices, directions, and more information can be found online at www.bowmangrayracing.com or by calling (336) 723-1819.