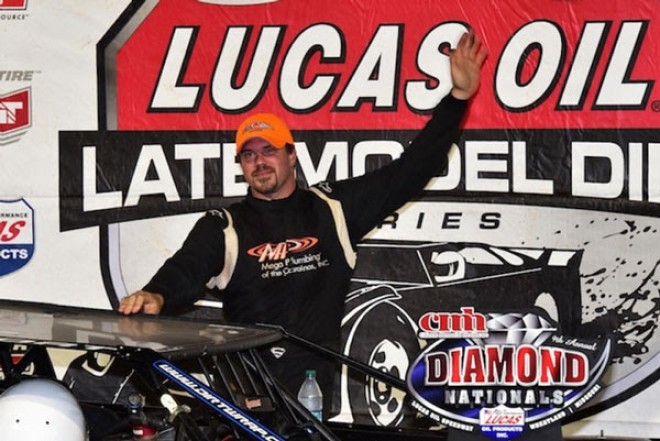 Scott Bloomquist’s rig broke down in Kentucky on the way to the track. He jumped in Jared Landers’ back-up car and charged from 17th to finish second. Jimmy Owens was third, followed by Brandon Sheppard and Chris Simpson, who started 22nd.

“What a win! We didn’t leave North Carolina until 4 o’clock this morning. We got here just before the drivers meeting. I don’t know what else I can say about this Longhorn Chassis. It’s been a great year so far. With all the rain they have had here, the track was really good.”

“I can’t thank Kevin and Le Roy Rumley, all of my sponsors: TS Crane Service, Sundance Services, Sundance Flowback Well Testing, Mega Plumbing of the Carolinas, JRi Shocks, and Bryson Motorsports enough for all that every single one of them do for us. I don’t know what we will change on the car for the Show-Me 100 tomorrow night; we will decide that tomorrow. We are all going to bed and get some rest,” said Davenport.

Jared Landers bolted from his outside front row starting spot to take the lead at the start of the race. Landers held the point until fellow front row starter Billy Moyer took over the lead on lap 13. Landers then fell to third and in attempt to retake Davenport for second; he lost control and spun into the turn one wall.

On the restart Moyer led for two circuits, but slowed just past the flag-stand and stopped in turn two to bring out a caution on lap 16. Davenport then picked up the lead and sped away to the finish.

A long day for Bloomquist ended with a podium finish in second. “I want to thank Lance Landers for letting me drive his car. It helps a lot to jump into a car you built. We made a few changes after each time we were on the track. It’s a really good car. I don’t know if they will let me drive it again or not,” said a smiling Bloomquist. “Hopefully our car will get here tomorrow. I would like to thank Reece Monument Company, Crop Production Services, Mark Martin Automotive, and all of our other sponsors who help us out.”

Owens has dominated the Diamond Nationals several times in the past and was pleased with his third place finish in the Rowland Racing, Widow Wax, Club 29 Ford. “That 6 car is a roll this year, no doubt about it! I thought we had something early for them, but we will make some adjustments and come back tomorrow night.”

In preliminary action, Billy Moyer set the overall Miller Welders Fast Time (Group A) amongst the 48 entrants, with a lap of 15.104 seconds. Jared Landers set the fastest time in Group B with a time of 15.299 seconds. Billy Moyer, Jason Papich, Jared Landers, and Jimmy Owens won their respective heat races. Scott Bloomquist and Jesse Stovall won their respective B-Mains.