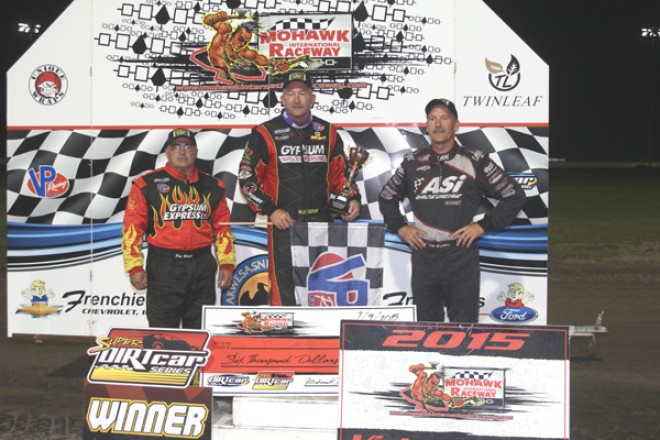 [xyz-ihs snippet=”Horizontal-Google-Banner-Series”]
HOGANSBURG, N.Y. – July 9, 2015 – Billy Decker drove to his third Super DIRTcar Series win of the season in the Gypsum Wholesalers No.91 Thursday at Mohawk International Raceway despite a late race rally by Tim Fuller.

Decker started 7th in a 30-car field in the Gypsum Wholesalers No. 91 and took the lead on a lap-79 restart after a 30-lap duel with Billy Dunn. He opened up a four car-length lead while Fuller kept advancing (13th at halfway) and moved into second just before a final caution with nine laps left.

Fuller ran a high line and led by a wheel at the line to complete lap 93 before Decker regained control. Earlier, Decker earned the Pole Position Raceway Fast Time Award by besting Brett Hearn by 0.001 seconds.

Decker stayed in the lowest groove possible while Fuller got a wheel past him on the outside to lead 93 but then he regained control and won by four car-lengths.

“Fuller scared the hell out of me,” Decker grinned in victory lane. “I had a very good car and track was in terrific shape. Dunn and I ran two different lines for a long time. There was a lot of track to work with.”

Dunn, the 2014 Mohawk track champion, started 3rd and wrested the lead from Brian McDonald on lap 29 after a door-to-door battle with polesitter Carey Terrance. Decker wound up alongside him on a lap 52 restart after the second of six cautions.

A final caution on lap 91 set up Fuller’s bid. He had advanced steadily in the second half of the race.

“I made a different tire choice than Decker,” Fuller said. “You heat up the right rear enough and you fade. I lead a lap, but it was the wrong one Considering where I started I’ll take it.