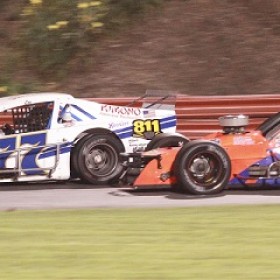 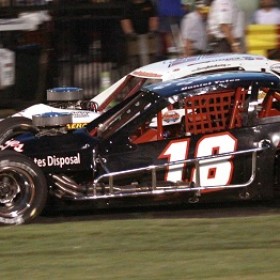 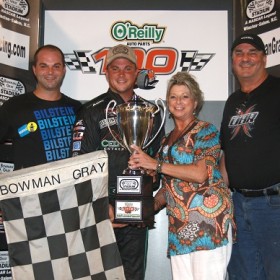 (Bowman Gray Stadium, Winston-Salem, NC) A lucky draw and a strong car brought home the trophy for Danny Bohn on Saturday. And while Lee Jeffreys only finished fourth, he has 6,000 reasons to celebrate.
Bohn was last year’s champion in the Brad’s Golf Cars Modified Series but moved back up to his northern hometown of Freehold, NJ to pursue career opportunities. But Saturday night’s O’Reilly Auto Parts 100 brought about the
Colors Edge Challenge: the top four qualifiers could opt to go to the rear for the chance at $6,000 if they fight back up to the front. It was worth Bohn making the trip down from New Jersey.
“I really came down to try to do the Colors Edge Challenge, but it’s really tough qualifying in the top four here not running every week – because the track changes so much,” said Bohn. “After we didn’t qualify in the top four, I
figured I’d try to just bring home the hardware.”
Cale Gale of Winston-Salem drew the pole for his starting spot, with Bohn randomly drawing the outside front row. Gale secured the lead during the initial start, but a quick double-file restart a few laps later saw Bohn rocketing
into the lead.
Bohn then held off an attempt by Gale to reclaim the top spot and later two challenges from Tim Brown of Tobaccoville. “Tim’s always good, so I thought he would give me a run for my money. But I knew if I got into the lead it
would be tough to pass me. My car was really good,” said Bohn.
Burt Myers of Walnut Cove made his way forward from a seventh place start to pressure Tim Brown’s bumper. As he and Brown approached lapped traffic, Myers grabbed away second place with a daring move that took them
three-wide through the turn.
But while these battles were raging at the head of the pack, many eyes were focused on Lee Jeffreys of Winston-Salem. Jeffreys was the third-fastest qualifier and the only one to accept the Colors Edge Challenge. Jeffreys opted to
start 20th – in the rear – for the chance to win $6,000 if he finished in the top four.
“The car was real good in practice today. We talked to the guys after we got top four. They said that we’ve been in the back all year – let’s see if we can do something,” said Jeffreys.
Every restart, Jeffreys chose well – jumping from 20th to 15th to 11th and then to 7th. He gained another position in a restart and yet another when Cale Gale fell back. With almost 25 laps to go, Jeffreys moved past Chris Fleming
of Mount Airy to take over fourth.
He was still there when the checkered flag waved and $6,000 came his way. “All the cards fell the way we needed them to, and we got back up there pretty quick,” said Jeffreys.
In the Farm Bureau Insurance Sportsman Series, Zack Clifton of Walkertown moved past Michael Adams of Yadkinville to grab the win in the first 20-lapper. John Holleman of Winston-Salem pulled off an unbelievable save to hold off
Tommy Neal of Walkertown and take the win in a wild second Sportsman race.
Derrick Rice of Kernersville won in the Q104.1 New Country Street Stock Series, with Shane Southard of Yadkinville and Stephen Sanders of Midway each winning in the McDowell Heating & Air Stadium Stock Series.