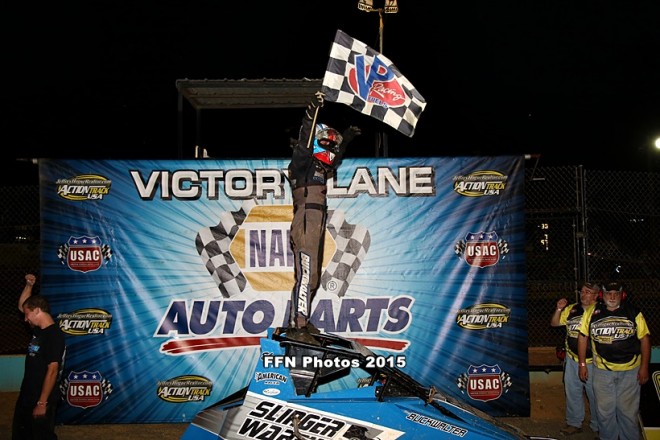 Kutztown, PA –  After a three-week break, Kutztown’s JeffreyHogueRealtor.com Action Track USA opened its gates once again on Wednesday, July 8 to the enthusiastic response of a large crowd and a pit area full of anxious race teams.
[xyz-ihs snippet=”Horizontal-Google-Banner-Series”]
Utilizing a new handicapping procedure for the USAC All Pro SpeedSTRs – instituted during the break – did not deter Tim Buckwalter from picking up his second victory of the season in the division’s 30-lap main event.
Joining Buckwalter in Wednesday’s winner’s circle were Brandon Azzalina, who broke through for his first triumph in the Pioneer Pole Buildings Wingless 600cc Sprints powered by Engler Injection, and Chris Kurtz, who notched his second win of the season in the 20-lap feature for the NAPA Auto Parts All Star Slingshots.
Earl Paules set the pace during the opening laps of the USAC All Pro SpeedSTR main while Mike Bednar, Ryan Smith, Frank Yankowski, and Jeff Strunk wrestled for the runner-up position. Smith finally secured the spot, then ducked under Paules in turns one and two to snare the lead on lap 12. 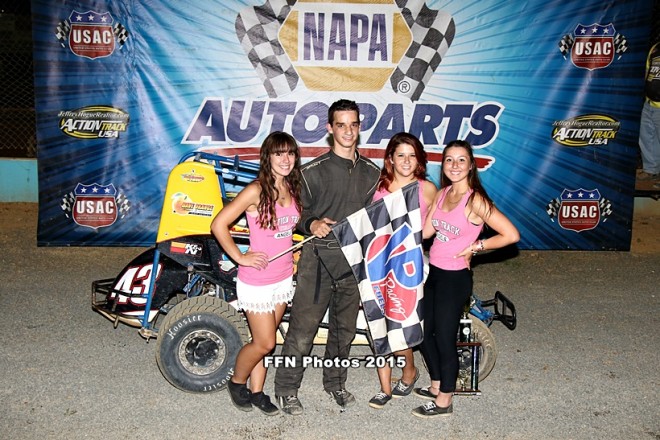 Douglassville’s Tim Buckwalter, who started 12th, was steadily moving forward along with point leader and defending champion Billy Pauch Jr. Buckwalter zipped into second place on lap 13 and Pauch motored into fourth as the halfway signal was displayed to the field.
With 11 circuits remaining, Buckwalter slipped past Smith to grab the top spot, then held off the 410 Sprint Car ace from Kunkletown to win his first SpeedSTR feature since the season opener on May 13.
“Guess it just goes to show that it doesn’t matter if they use a handicapping system for the line-up,” smiled Buckwalter in victory lane. “We just proved you can start 12th and win in these things. I have to thank Paul Lotier for giving me a great car each week; this thing was really dialed in tonight.”
Pauch Jr. wound up third, with Mike Bednar and Jeff Strunk completing the top five.
All season long, Saylorsburg, Pa. driver Brandon Azzalina has been knocking on the door to his first Action Track USA victory and he finally kicked in that door on Wednesday, throttling to a convincing triumph over Jason Swavely and Pauch Jr.
Two-time and defending track champ Jay Hartman led the early laps as a terrific four-car tussle ensued behind him. Alex Bright, Tim Buckwalter, Swavely, and the fifth-starting Azzalina waged a ferocious battle for the runner-up slot, going four-wide a few times before Azzalina prevailed and began to track down the race leader.
An eighth lap restart produced the defining moment of the 30-lap Tri-Track Challenge event for the wingless 600’s as Hartman and Azzalina raced side by side around the progressively banked oval. Hartman washed up the track in turn four, allowing Azzalina to blast into the lead.
Swavely, who entered the evening trailing Kyle Lick by just two points in the Tri-Track Challenge, soon charged into second while Bright, Buckwalter, Kyle Spence, and Pauch Jr. diced for positions three through six. Several restarts offered opportunities for Swavely to stick the nose of his Heffner Construction, RTS Chassis No. 14 under the leader, but Azzalina consistently shut the door on Swavely to repel each attack.
The final ten trips around the clay saw an entertaining battle for second between Swavely, Bright, and Pauch that permitted Azzalina to pull away and drive to the win by nearly one-second over Swavely. Pauch Jr. finished third with Buckwalter staging a late race charge to place fourth. Hartman wound up fifth as Bright fell out with a couple of laps to go. 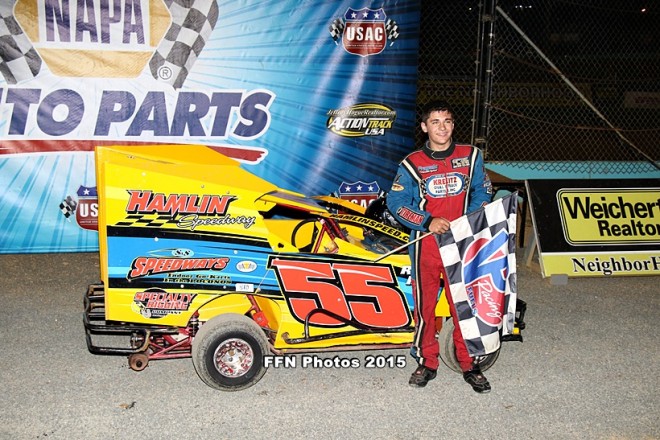