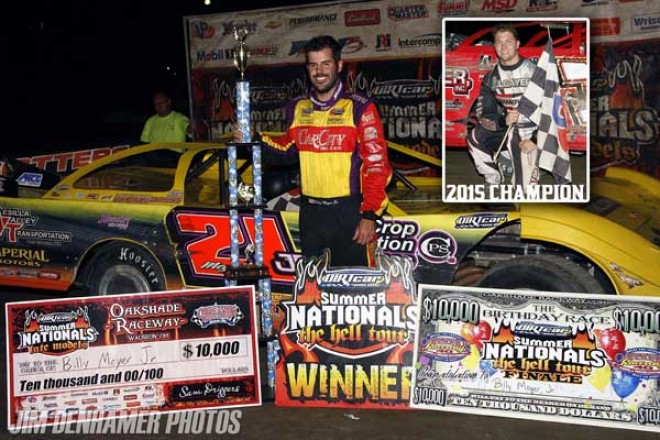 WAUSEON, Ohio – July 11, 2015 – Billy Moyer Jr. needed a victory on Saturday night at Oakshade Raceway to have any chance of winning the DIRTcar Summer Nationals championship, so in the first half a lap he charged through the front row from his fourth-starting position and pulled away to win.

The 18-year-old Bobby Pierce, though, became the youngest champion in the history of the series by finishing fifth, edging Moyer for the crown by a mere 10 points. Both Pierce and Moyer Jr. are the sons of former DIRTcar Summer Nationals champions, with Pierce and his father, Bob, now the only father-son combo to claim the title. Pierce also joins a prestigious group of racers who have won the DIRTcar Late Model national championship (2014) as well as a DIRTcar Summer Nationals championship.

“We tried really hard and we had a good hot rod tonight,” said Moyer Jr., of Batesville, Ark., after his $10,000 victory. “Ten points shy, it is what it is. Bobby did a good job and we’re just glad to be winning races and running up front. People at least know we’re there … it’s no fun running seventh and 10th every night and we’ve been there too. So we’re just glad to be up front.

“I hate to even think about the points, but you know, you have to. It pays a lot of money. I want my name on that deal. But we’re gonna get it on there … we’re gonna work really hard and come back and hopefully do it again next year if all my support and everything stays the same. It sucks to get beat, but man, to win $10,000 here in Ohio with a huge crowd, I’m happy.”

Pierce started 12th and had to race forward to ensure he would lay claim to the championship, worth $25,000.

“It’s been a long month of racing, even with the rainouts it’s still been 30 days up and down the road,” said Pierce, of Oakwood, Ill. “It takes a toll on you, on your equipment. Now that it’s over it’s just kind of like a big weight has been lifted off my shoulders. I knew when I saw Jr. get the lead and I was still back in 10th that I had to get up on the wheel. I had the math figured in my head that I had to get to a certain spot to win. Once I started picking cars off I got more comfortable. Congrats to Billy, he did everything he could do to try to win the points.”

Moyer bested a field of 50 cars and survived 60 laps with two restarts to come ever so close to the title. Casey Noonan, Jason Feger, Dona Marcouiller and Pierce rounded out the top five.

Follow the Summer Nationals and DIRTcar Summit Modified Nationals on Twitter@SummerNationals or on Facebook at www.facebook.com/SummerNationals, or visit the series’ websites at www.TheHellTour.com and www.ModifiedNationals.com.