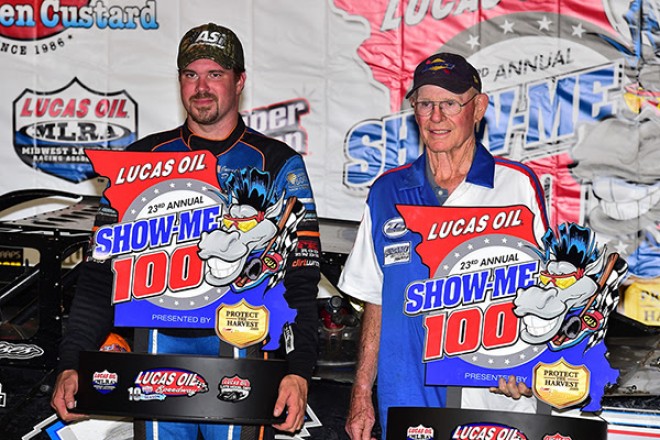 WHEATLAND, MO (July 12, 2015) – Proving why he is the number one-ranked dirt late model driver in the nation, Jonathan Davenport captured the 23rd Annual Lucas Oil Show-Me 100 presented by ProtectTheHarvest.com on Sunday night. Davenport took the lead at the start of the event led all 100 laps to score the $30,000 victory. The event was sanctioned by the Lucas Oil Late Model Dirt Series and Lucas Oil MLRA Series at Lucas Oil Speedway in Wheatland, MO.

Davenport’s ninth LOLMDS victory of the season extended his championship points lead to 240 points. Scott Bloomquist fought from 16th to finish second. Chris Simpson was the OPTIMA Batteries Hard Charger of the Race after storming from 31st to finish third. Jimmy Owens came from 25th to finish fourth, with Jesse Stovall capturing fifth at the finish.

Davenport only lost the lead for a brief time when Stovall pulled a slide job on him in turn one late in the race, but Davenport forged ahead to retake the lead shortly after. He went unchallenged the remainder of the race.

“The wait to run this race was worth it. Our car has been so good this year. I would like to thank Kevin and LeRoy Rumley. LeRoy builds our engines, and when Kevin went to Longhorn Chassis to work with the Labonte Brothers a few years ago, it has completely turned that program around.”

“I slowed down with about 25 laps to go and the car got tighter. I ran the bottom a few times and felt like I was slowing down too much. So I went back up top. It was rough up there on that berm. We hung on and I just can’t believe the year we are having. I would also like to thank TS Crane Service, Sundance Services, Sundance Flowback Well Testing, Mega Plumbing of the Carolinas, JRi Shocks, Bryson Motorsports, everyone on the crew, the Rumleys, and Brian Liverman. Wow, this is great!”

Bloomquist finished second to Davenport, after battling his way up through traffic to take the spot away from Stovall. “He [Davenport] is on a roll, a lot like I was at the end of last year. They have something figured out that the rest of us don’t. We just started too far back tonight. I would have liked to see a caution near the end, just to see what we had for him. With the way the weekend has gone, we’ll re-group and get ready for Nebraska next week.”

Simpson had the drive of the night. He won the Midwest Sheet Metal Show-Me Challenge and turned down the $2,000 first place money by electing to start on the tail of the Show-Me 100. “I told my car owner [Raymond Childress] if I won the challenge what did he want me to do, and he said we are here to win $30,000.”

Simpson nearly lived up to the prediction of his car owner after coming from 31st to third. “Wow, what a race. I would have liked to have seen a caution with about 10-15 laps to go. The car felt so good tonight, just rolling through the corners. I don’t know if I could go another 100 laps, but I would give it a shot. We will take this car to Nebraska next weekend and go for the win.”