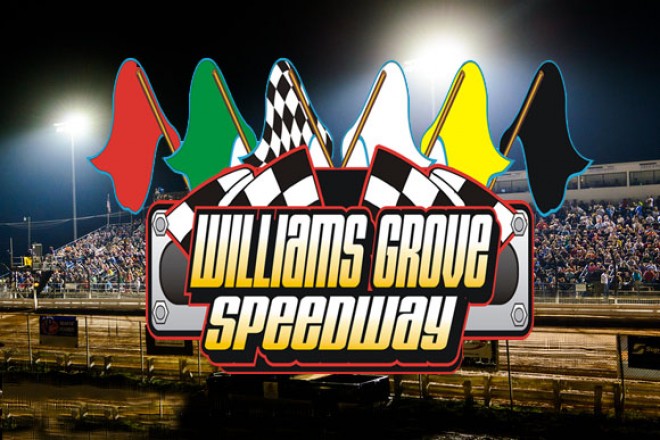 Devon Beidel started outside of the Super Sportsman front row and led the start. Justin Foster, Steve Fannasy, Chad Trout, and Tony Jackson were in pursuit of the leader.  By lap five the competition for the lead became a three-car fight between Beidel, Foster and Fannasy.

There was a shuffling of the field behind Beidel during lap eight when Justin Foster slid up the track.  Steve Fannasy advanced into second with Tony Jackson, Russ Mitten and Chad Trout trailing.  The event’s first caution occurred during the 11th circuit.  Cautions returned in the next two laps.

Frankie Herr, from Carlisle, began the race in 11th position.  Herr stuck on the lap 14 restart; his No. 99 thundering into fourth position.

Devin Beidel continued to hold a two-length lead. Tony Jackson swung by Steve Fannasy for second with Frankie Herr charging into third. Herr struck during the 18th lap when he used the outside lane to sweep by Jackson and Beidel.

Frankie Herr, using a new style of Super Sportsman wing, crossed the finish line 10-lengths ahead of Tony Jackson.  Devon Beidel was third with Steve Fannasy in fourth and Scott Dellinger in fifth.

Earlier in the evening, Scott Geesey’s Super Sportsman took a series of violent flips entering turn three.  Geesey was transported to the hospital for treatment of a broken arm.

Sagi and Knaub applied heavy pressure on Kline due to six caution flags from laps seven through 13.  After the flurry of yellow flags Kline held a five-length edge as Sagi and Knaub fought for second.

The race came to a stop on lap 20 when Chase Billet crashed heavily into the backstretch fence. Billet started 13th and was in the top five at the time of his wreck.

After the restart Alan Sagi and Gene Knaub continued their fight for second allowing Ron Kline to widen his lead.  During the 17th circuit Sagi and Knaub made contact on the frontstretch with Sagi’s car sliding along the fencing.  Gene Knaub made the pass but in turn two slowed and Sagi regained the position.

Ron Kline, from Salfordsville, won his first of the year by 2.5 seconds over Alan Sagi.  Gene Knaub was third with Billy Wampler in fourth and Sam Rial was fifth.

Sean Dawson went to work on the outside lane and by lap seven he was even with leader Chris Heller.  One circuit later Dawson became the new leader with a turn-three pass.

Dawson’s lead was just one lap when a flat right rear tire brought the Virginia driver to a stop. Chris Heller was back in front with Steven Dove and Jasen Geesaman applying strong pressure.

Caution returned with two laps remaining.  Geesaman used the restart to pass Dove.  On the final lap Jasen Geesaman dove under Chris Heller entering turn one.  Heller held a slight lead off turn two.  In the final turns Geesaman tried the bottom lane but Heller had momentum off the turn. Chris Heller, from Carlisle, won his first of 2015 by a length over Jasen Geesaman. Steven Dove was third with Greg Diehl in fourth and Kory Sites was fifth.

Next Saturday night Williams Grove Speedway presents Kids Night.  This is the biggest event of the year for the Saturday Night Series.  Kids Night is racing and a carnival combined providing evening-long entertainment for children of all ages.  Prior to the races the SNS race teams will have their cars in the infield allowing children and their parents and see the cars and meet the drivers.  Many of the race teams will have giveaways for the kids.  Adult admission will be $6 with children 12 and under free.