Doug Moff Maybe Off to the Hottest Start at Desoto Speedway 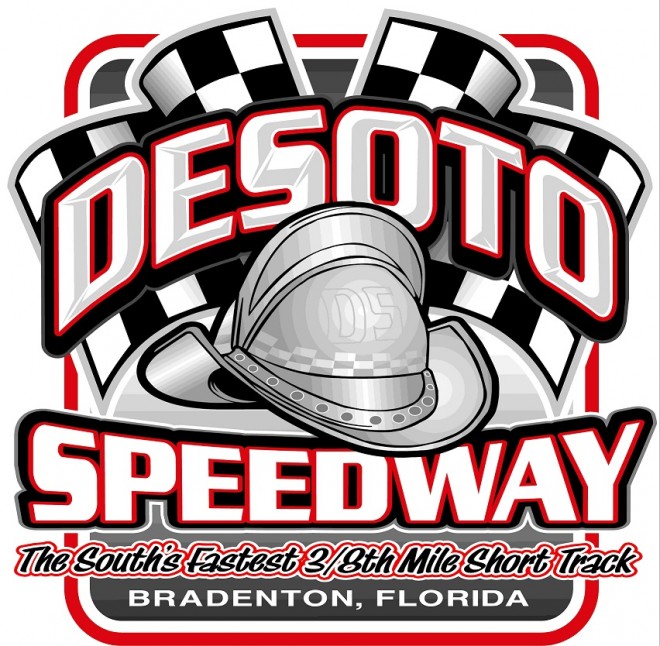 Doug Moff may be off to the hottest start in the state of Florida for the 2015 racing season.

After grabbing two wins during last month’s World Series of Asphalt Stock Car Racing at New Smyrna Speedway, Moff opened Desoto Speedway’s 2015 season with a convincing win in the 40-lap J.D. Byrider Open Wheel Modified feature on Saturday night.
Wayne Jefferson, who won during Desoto’s Icebreaker weekend last month, started on the pole and held the lead through several restart attempts in the early going. After a rash of yellows Doug Moff grabbed the top spot and was leading with D.J. Hoelzle in tow when the caution flew for a spin at the halfway point of the 40-lap event.
On the restart Moff and Hoelzle ran side-by-side for a lap with Hoelzle on the high side. As the pair completed the 22nd lap they got together, with Hoelzle making contact with the front stretch wall. He lost several spots as a result of the contact but was able to continue.
Greg Krom’s spin brought the yellow out with 15 laps to go. On what would be the final restart Moff got the jump on Jefferson and pulled away for the win. Jefferson finished second, with Josh Todd, Nick Hernandez and Hoelzle rounding out the top five
In the 25-lap Mini Stock feature, Ronnie Robinson and Cameron Cruse started side-by-side on the front row and stayed in that formation for the first dozen laps of the race. After the yellow flew for Jessica Ostrovskis’ spin Robinson and Cruse kept their battle going until Robinson started to slightly pull away.
Over the last couple of laps Robinson’s car began to push, which allowed Cruse to close back on to Robinson’s rear bumper as the field took the white flag. Cruse made one last effort to dive underneath heading into the final turn, but Robinson held on for the win. Ostrovskis came back through the field after her spin to finish third.
The 30-lap Take Aim Gun Range Street Stocks feature was a four-way battle between Jonathan Heidenti, Ander Jackson, Bobby Mobley and Mike Karrivan. Heidenti took the early lead and faced constant pressure from Mobley and Karrivan. Halfway through the race, Mobley finally got under Heidenti and took the top spot with Karrivan and Jackson, who pitted for a flat tire after the first lap, close in tow.
After a spin brought out a caution Mobley and Jackson were side-by-side for a restart with seven laps to go. Mobley grabbed the lead, but Jackson eventually capitalized on Mobley’s loose race car with five laps to go. Jackson quickly pulled away and cruised to the win. Heidenti passed Mobley with two laps to go to finish second. Mobley was third.
In other action Saturday night, Carl Thompson won the 25-lap Bomber feature; and Shawn Senokossoff won the Pro Figure 8 feature.
Desoto Speedway returns to action next Saturday night with the Sunoco Racing Fuels/Turner Tree and Landscape Super Late Models taking to the high banks for 75 laps. The Joey Coulter Florida Pro Trucks, Pure Stocks, Rookie 4’s, Mini Stocks and Bombers.