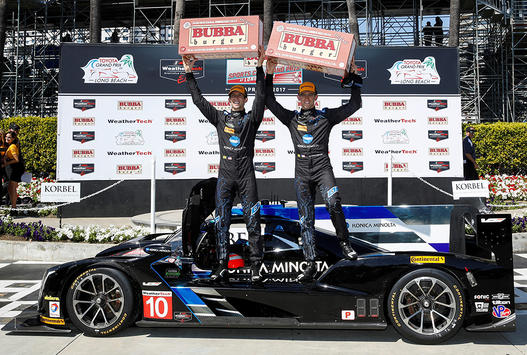 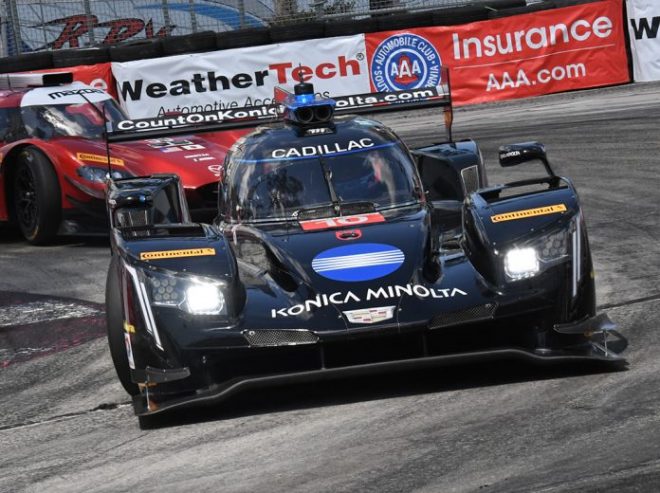 It was Jordan Taylor who had the wheel during the final stint in the Wayne Taylor Racing No. 10 Cadillac DPi, and it was a move in turn one with five minutes remaining that was the winning maneuver. Taylor got a run on race-leader Ryan Dalziel down the frontstretch and swung around the outside of Dalziel’s No. 2 Tequila Patrón Nissan DPi, utilizing GT lap traffic to pull ahead to a 6.349 second victory.

“Jordan was on a mission,” said Ricky Taylor, who joins his brother atop the WeatherTech Championship wins list with 10 wins. “I was out of the car, and when I looked at the timing screen it said there was 37 minutes to go. That was torture watching that. But at the same time, I wouldn’t want to be under the pressure that Jordan had to be under. I was nervous either way.”

The second-place finish for Dalziel and co-driver Scott Sharp was the Tequila Patron ESM team’s highest finish of the season, besting its fourth-place effort at Daytona. Dalziel led for much of the second half of the race, utilizing pit strategy to move to the front of the Prototype field. He traded fastest laps with Jordan Taylor in the closing minutes before being slowed by a GT car, allowing Taylor to get by.

“We had the fastest car all weekend, but when we saw how fast Ryan was going we knew it was going to be a battle,” said Jordan Taylor. “Then I knew it would have to be him making a mistake or if we caught really heavy traffic. It’s difficult to judge where to brake when you’re offline, so when we hit traffic I was able to take advantage when a GTD car took the same line as Ryan and I had the open track.”

“There were plenty of race moments where things went well for me and bad for Jordan, but not always,” added Dalziel. “I hit the brakes, went one way, and it was the same as the GTD car. I tried to go the other way, but then I saw a big black Cadillac drive right by me and that was the end of it.” 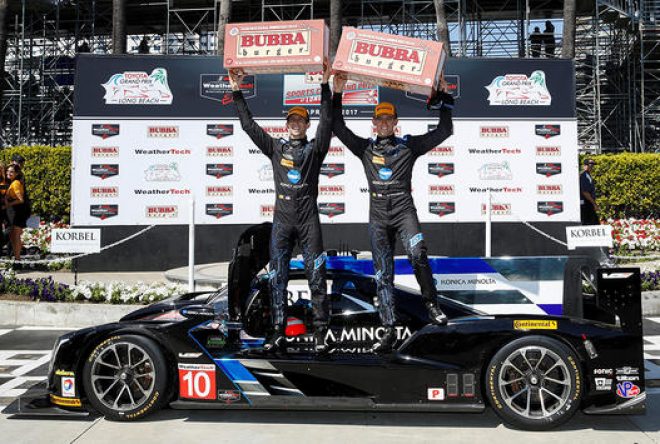 It was first time in WeatherTech Championship history that the same car won the opening three races on the schedule. The Taylor brothers were joined in victory at the season-opening Rolex 24 At Daytona by Jeff Gordon and Max Angelelli, and the Mobil 1 Twelve Hours of Sebring Fueled by Fresh From Florida by Alex Lynn.

In GT Le Mans, the iconic hairpin turn at the Long Beach street circuit played a central role in the determining the victor.

A multi-car incident in the hairpin on the final lap of Saturday’s race had the entire racetrack blocked as race-leading Antonio Garcia approached the turn in the No. 3 Chevrolet Corvette C7.R ahead of the No. 4 driven by Tommy Milner and Richard Westbrook in the No. 67 Ford Chip Ganassi Racing Ford GT. Garcia attempted to maneuver around the outside of the incident, while Milner opted for the inside lane.

Moments later, the No. 52 Prototype managed to get going and drive away after the incident, opening the inside lane. With Garcia still blocked by cars on the outside, Milner passed through the incident scene and headed for the checkered flag, with Westbrook following close behind.

“I tried going to the outside in the same situation last time and lost spots,” said Milner, who co-drove with Oliver Gavin. “This time I went on the inside. I wasn’t even full speed (after the incident); I was cruising thinking we were under caution. Then I saw the green flags and the guys on the radio said we were P1.

“Racing is a lot about luck in a lot of cases. I don’t think I’ve seen it play out this way for me or for anyone else. It’s good to just get some points for me and for Chevrolet and Corvette.”

When all was said and done, Milner and Gavin were standing atop the victory podium, with Westbrook and co-driver Briscoe in second and the No. 912 Porsche GT Team of Kevin Estre and Laurens Vanthoor in third. It was the fourth consecutive race in which the GTLM podium featured three different manufacturers.

Garcia and co-driver Jan Magnussen – who qualified on the GTLM class pole fell to fifth at the finish, behind the No. 25 BMW Team RLL co-drivers Bill Auberlen and Alexander Sims. 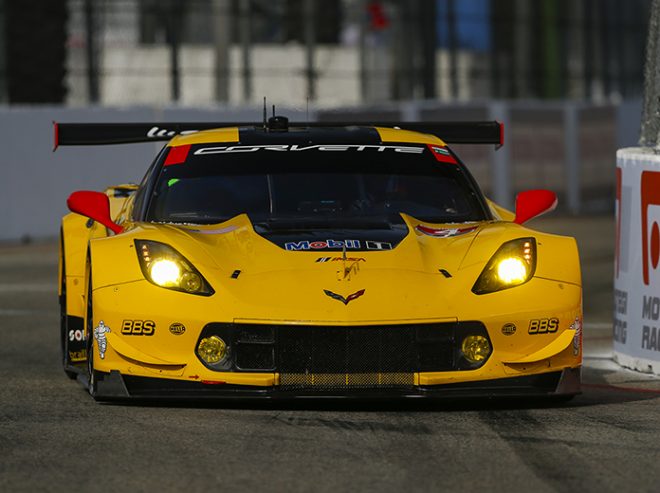 In the GT Daytona division, the No. 50 WeatherTech Racing Mercedes-AMG team played its race strategy to perfection, enabling co-drivers Cooper MacNeil and Gunnar Jeannette to earn their first victories in WeatherTech Championship competition.

After a 13th-place class qualifying performance on Friday, the team elected to start the race on fresh tires, moving the No. 50 Mercedes-AMG GT3 to the back of the field. When the second of the race’s five full-course cautions came out after 18 minutes, MacNeil brought the car into the pits for service and handed over the controls to Jeannette.

Jeannette then inched his way forward through the field as others made their stops, making his way to the head of the GTD field at the 47-minute mark in the race. He stayed there for the rest of the way, winning by 7.492 seconds over teammate Jeroen Bleekemolen in the No. 33 Mercedes-AMG entry.

“We qualified pretty far toward the back but times were tight,” MacNeil said. “We made the strategy call to change to four fresh tires and to go absolutely last. So, it’s pretty good to go from last to first.”

MacNeil had five previous victories in ALMS competition, while Jeannette won six ALMS races and one Grand-Am race previously. It was the second consecutive WeatherTech Championship win for Mercedes-AMG, which earned its first victory in the series last month at Sebring, and was the manufacturer’s first 1-2 sweep.

“I kind of blacked out for a minute and the next thing I know the checkered flag is out and I’m crossing the finish line,” Jeannette said. “A lot of things can happen if you roll the dice and take a risk and taking a chance was the only card we had to play. 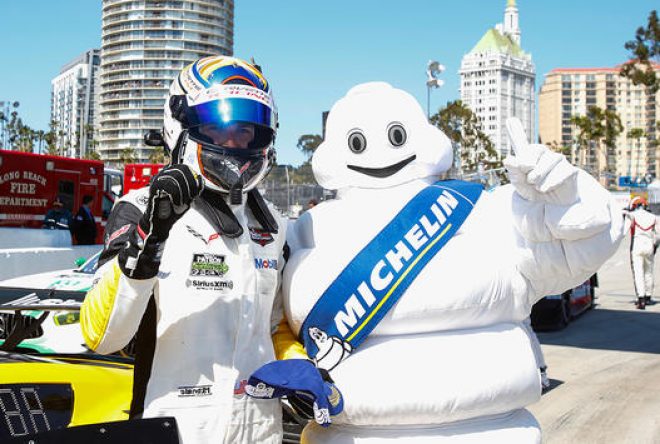 “I knew my job was to go back out and go as fast as I could and not use any fuel. We might have had to take one more splash but with enough yellows we didn’t have to. With 35 cars going around we kind of lucked out and we didn’t have to risk it and it worked out our way.”

The runner-up result for Bleekemolen and co-driver Ben Keating allowed them to extend their lead in the GTD point standings to 21 points, 98-77, over No. 63 Scuderia Corsa Ferrari 488 GT3 co-drivers and defending GTD champions Christina Nielsen and Alessandro Balzan, who finished third in the race.