The Ford GT Found Victory Lane During the Rolex 24 on Sunday Afternoon. 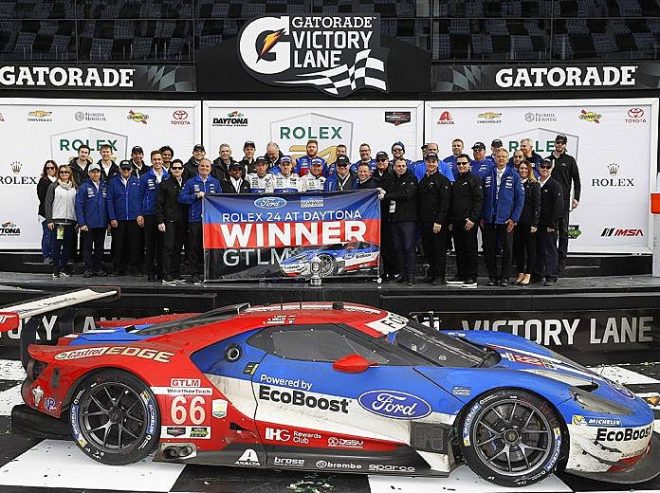 DAYTONA BEACH, Fla.- January 30, 2017- A year after the competitive debut of the Ford GT at the Rolex 24 at Daytona Int’l Speedway, Chip Ganassi Racing brought the Ford GT back to Daytona determined to find victory lane.

On Sunday afternoon at 2:30 p.m., it was mission accomplished.

Dirk Mueller, Joey Hand and Sebastien Bourdais piloted the No. 66 Ford GT to victory in the GT Le Mans class Sunday, putting the cherry on top of the first year of competition for the Ford GT.

Mueller was at the wheel for the final stint and a daring move entering turn one with just more than 30 minutes left got him to the race lead and he was able to hold it through the final moments of the race despite a challenge from Porsche driver Patrick Pilet.

“What a race,” Mueller said. “I could write so many books just about every single lap in the rain where I got at least five moments where I thought I was going to scratch it. I think Joey, Sebastien, the whole Ford Chip Ganassi Racing team did a fantastic job. 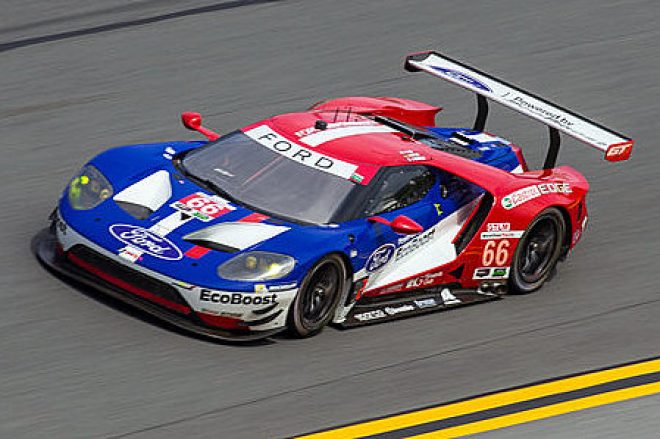 “Both the Ferrari and the Porsche turned it really up at the end,” said Mueller. “They were so much faster on the straight all of a sudden, and yeah, I just had to stick to my line and to cover myself, and it worked out.”

“You know, things just work out,” Bourdais said. “At the end of the day, it’s one of those oldest endurance races that everybody needs to win or to lose, and to be honest with you, we just didn’t put a foot wrong or a wheel wrong, neither at Le Mans, neither here, and it just paid off.”

Hand echoed Bourdais’ statements, saying for some reason the trio just seems to jell perfectly together. With a Rolex 24 victory and 24 Hours of Le Mans victory in hand, it’s hard to argue. 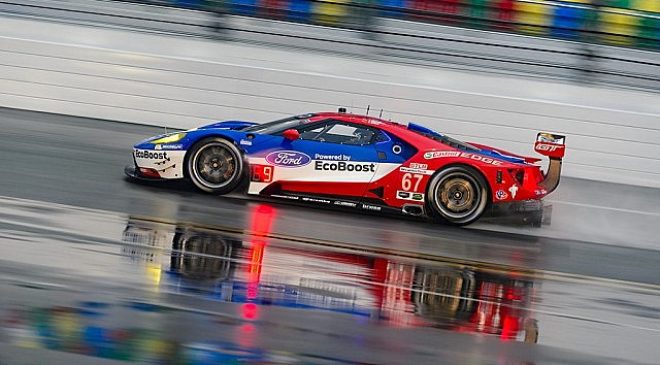 “The three of us together, you may not think it, a German dude and a French guy that’s got a bunch of IndyCar championships and a Californian, but we do really work well together,” said Hand. “The weekend was just going as it should, as you hoped, and the car was fast throughout the race. We had a good car. It was racy. (The) setup we went with made us pretty strong in the wet, also, and we all had to drive through some of that treacherous rain.

“We did what we had to do.  We got the car through.  There’s no scratches on it.  It’s dirty but everything is still on it the way it rolled out of the trailer, and Dirk brought it home for the win, which made me very uncomfortable to watch, and sweaty,” Hand said.