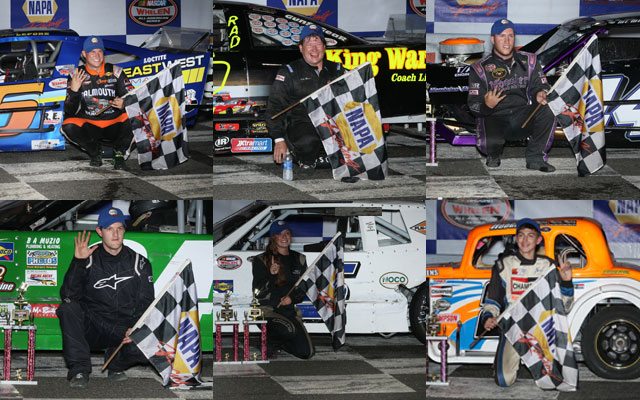 In the 40-lap SK Modified® feature event, Joey Cipriano took the early lead with Ryan Preece quickly moving into second.  Michael Gervais, Jr. was third with Todd Owen and Keith Rocco rounding out the top-5.  The caution came out with 4 laps complete as Cam McDermott’s car was nearly stopped in turn 3.

Preece went around Cipriano to take over the lead on the restart with Gervias, Rocco, and Dan Avery making up the top-5.  The action was slowed by the caution with 5 laps complete as Sean Foster and Tom Bolles spun in the middle of turns 3+4.

Preece took the lead back under green with Rocco moving into second.  Cipriano was third while Ronnie Williams and Rowan Pennink were side by side for fourth.  Pennink got the better of that duel and took over fourth as Preece was slowly starting to stretch out his lead over Rocco.

At the halfway point of the race, Preece had stretched his lead over Rocco to just over 1 second.  Lined up in a train behind Rocco was Cipriano, Pennink, and Williams.  The order shuffled on lap-21 as Cipriano pulled alongside Rocco for second and Pennink and Williams were side by side for fourth in what looked like a high speed pace lap before Preece’s large lead was erased by the caution with 22 laps complete as Todd Owen, Mike Christopher, Ted Christopher, Jay Sundeen, and Matt Gallo all made hard contact with the turn 3 wall.

Back under green Prece took the lead with Rocco taking second.  Williams was looking for a way around Cipriano in the high groove for third and Eric Berndt and Woody Pitakt were side by side for fifth.  Williams got clear of Cipriano and he then took second from Rocco while Pitkat got the best of his duel with Berndt to sit fifth with 10 laps to go in the race.

In the 30-lap Late Model feature event, Rich Hammann took the early lead with Michael Wray behind him.  Wray made a move to Hammann’s inside on lap-3 and he moved to the front.  Josh Wood moved by Tom Butler after a side by side duel to take over third on lap-4.  Wood then took the lead from Wray as they completed lap-5.  Butler was third behind Wood and Wray with Tom Fearn streaking his way through the field to sit in fourth and Michael Bennett was fifth.

Fearn moved into third on lap-7 and Bennett got by Wray to move into fourth on lap-8.  Butler’s car spun and got into the turn 2 wall to bring the caution out with 9 laps complete.

Fearn took the lead back under green with Bennett moving up to second.  Wood was third with Wray and Kevin Gambacorta rounding out the top-5.  Bennett gave a tap to Fearn’s bumper and got his car slightly sideways, but Fearn was able to maintain his lead with Bennett still right behind him on lap-16.

Fearn and Bennett slowly pulled away from Wood in third and Bennett was never able to get closer than a car length as Fearn knocked down his 10th win of the 2015 season.  Wood finished third, with Gambacorta and Michael Scorzelli rounding out the top-5.

In the 20-lap SK Light Modified feature event, Glenn Griswold took the early lead and immediately began to pull away as Kyle Jette and Jay Goff were side by side for second.  Goff got the better of that duel and took second on lap-5 while several cars got out of shape behind him.  Tony Membrino, Jr. settled into fourth with Kyle Trayner in fifth.  Membrino got around Goff to move into third on lap-7 and the next lap saw him pull alongside Jette in a fight for second.  Several cars got together with Trayner limping his way back to the pits to bring the caution out with 8 laps complete and erase the large lead of Griswold.

Membrino got a great run on the outside of Griswold and he took the lead but that lead was erased by the caution flag as last week’s winner Daniel Wesson got into the turn 2 wall and came to a stop on the backstretch.

Membrino and Griswold resumed their side by side fight for the lead back under green but only 1 lap was completed before Jason Lafayette spun and collected the car of Wesson in turn 2 to bring the caution back out.

Membrino led the field back to the checkered flag to pick up his third win of the 2015 season.  Salva got sideways in the last corner and fell back as Burnham, Jette, Kopcik, and Goff rounded out the top-5.

In the 20-lap Limited Late Model feature event, Robert Bloxsom, III took the early lead with Glenn Bartkowski and Al Saunders behind him.  Justin Bren settled into fourth with Paul Arute, David Arute, and Andrew Hayes lined up in fourth through sixth.

Saunders got by Bartkowski to move into second on lap-7 and his pass allowed Bren to follow him by as Bartkowski fell back to fourth.  The caution came out with 8 laps complete for debris on the track.

Saunders took the checkered flag for his fifth win of the 2015 season with Paul Arute, Hayes, David Arute, and Bren rounding out the top-5.

In the 15-lap DARE Stock feature event, Nicole Chambrello led the field to the green and she took the early race lead.  Brandon Michael quickly worked his way into second, but he lost that spot to Trace Beyer.  Beyer got out of shape coming out of turn 4 on lap-4 and he fell to the rear of the field as the race stayed green with Chambrello leading Marcello Rufrano, Dan Dembek, Michael, and Tyler Trott.

Dembek took a look to the outside of Chambrello on lap-8 but Chambrello was able to hold him off.  Paul Bourdon, Jr. spun in turn 4 to bring the caution out with 9 laps compelte.

Rufrano was hanging tough on the outside of Chambrello on the restart as they ran a lap and a half side by side before Chambrello got clear into the lead.  Dembek and Rufrano were now side by side for second with Trott and Alexandra Fearn side by side for fourth.  Dembek took second from Rufrano and Trott took fourth  as the top-5 got back into single file on lap-13.  Trott and Rufrano got together with Rufrano hitting the turn 1 wall to bring the caution out with 14 laps complete and set up a green white checkered finish.

On the restart, L’Etoile went by Chambrello to take over the lead, but several cars came together and Bryan Granger, Dembek, Fearn, and Bill Staves all spun on the backstretch to bring the caution back out.

Chambrello powered into the lead with Michael and L’Etoile side by side for second.  Beyer was fourth and Trott was fifth.  Chambrello was able to hold the field off to the checkered flag to pick up her very first career victory at Stafford Speedway.  Michael finished second with Beyer, L’Etoile, and Trott rounding out the top-5.

In the 20-lap Legend Cars feature, Joey Ternullo, Teddy Hodgdon, and Joe Graf, Jr. all spun on the very first lap to bring the caution out.  The restart saw Hodgdon and Devin O’Connell spin to bring the caution right back out.  Michael Hopkins took the lead with Noah Korner all over his back bumper but the caution came back out with 1 lap complete for a spin by Brett Crowther.

Hopkins took the lead back under green while Korner slid back to seventh.  Joe Graf, Jr. was second with Ryan DeCandia, Hodgdon, and Ternullo making up the top-5 when the caution came back out one lap later for a spin by Mikey Flynn.

Hopkins again took the lead with Graf right behind him.  O’Connell moved up to third with Hodgdon and DeCandia side by side for fourth.  Hodgdon took fourth on lap-5 as Hopkins continued to lead the race.  O’Connell made a move to  the inside of Graf on lap-8 for second but Hodgdon made a 3-wide move and both O’Connell and Hodgdon got by Graf and then ran side by side for a lap before O’Connell moved into second.  The yellow came back out with 10 laps complete for Ternullo, whose car was off the pace.

Hopkins and O’Connell got together racing for the lead on the restart with O’Connell spinning into the turn 4 wall to bring the caution back out.  This promoted Hodgdon to the race lead with Mike Hopkins taking the outside lane for the restart.  Hodgdon took the lead with Korner now back up to second.  Hopkins made a move to his inside on lap-13 and he took the spot at the line.  O’Connell was back up to fourth with Flynn in fifth.

O’Connell got by Hopkins to take second but contact from Korner sent O’Connell around and brought the caution out with 16 laps complete.  Hodgdon took the lead back under green with Flynn right on his back bumper.  Hopkins was third with O’Connell working his way back up to fourth and Ternullo was fifth.  Korner and DeCandia got together and spun to bring the caution back out with 18 laps complete.

Hodgdon took the lead on the restart and he was never challenged by Flynn as he took down his second win of the 2015 season.  Crowther finished third, with Hopkins and O’Connell rounding out the top-5.  O’Connell’s finish was good enough to clinch the 2015 track championship.

For more information contact the Stafford Motor Speedway track office at (860) 684-2783, or visit us on the web at www.staffordspeedway.com.