Aaron Reutzel climbed the back of his No. 87 in celebration of his victory at Creek County Speedway with his son, Carson, who drew him the pole in Thursday’s feature event 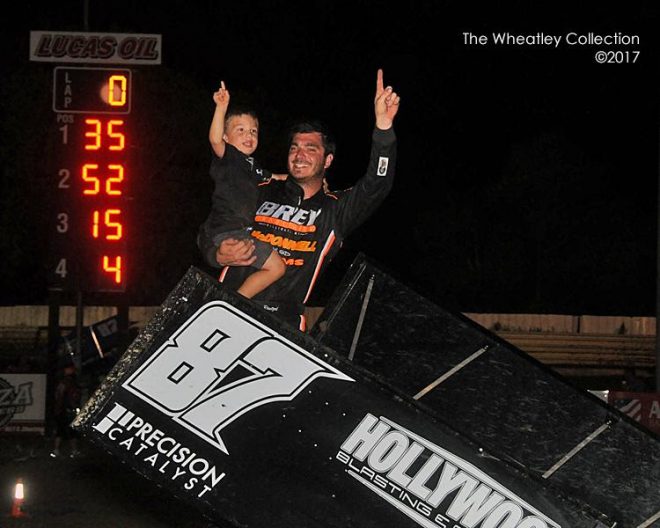 Winning at Creek County Speedway in Round 5 of the 2017 ASCS Sizzlin’ Summer Speedweek, the win is Aaron’s first National Tour triumph at the Oklahoma quarter-mile in the tour’s 24th visit since 1994.

“Carson told me today he wanted to stand on the wing, so when we went up the pill draw, I told him to get us the number one and I think I can get us up there,” said Reutzel with a smile as his son stood jubilant in Victory Lane at his side.

Winning the drag race to the first turn, the start would take a repeat as three cars stacked up off the fourth turn. Beating out Seth Bergman again, Reutzel stuck the left side tires of his Dissolvalloy No. 87 on the hub as the field slowed again with a single lap complete.

Quickly building his lead, Aaron found the back of the field on the 10th rotation. Picking his way around slower cars, the 2015 Lucas Oil ASCS National Tour Champion took in a few observations of where other cars were running.

“I was watching a couple of cars. Mainly Josh [Baughman] was trying to rip the top and I know if anyone can do it, he can, and he really couldn’t make it work so I knew there was no way those guys were going to pass me.”

Keeping his advantage at least 7-10 car lengths, despite a caution on Lap 16, things looked like they could turn interesting as the race closed again on Lap 21 for Sam Hafertepe who spun to a stop in the first turn.

With Seth Bergman on his rear bumper, Aaron had to hit his marks perfectly; which he did to eventually cross 1.224 seconds ahead of the Corridor Electric No. 23.

“I knew the start was going to crucial to who was going to win this race. I’ve been in that situation before and got the upper hand, but this time Aaron got the start. The bottom was where you needed to be so I just had to stay with him and do the best I could,” said Seth of the runner-up result.

Getting back on the front stretch for the third time in 2017, South Dakota’s Justin Henderson breathed new life into his season, “To say it’s been a disappointing start to Speedweek would be an understatement, and my team owner would second that so it feels good to get on the podium and see somewhat of a check.”

New York’s Jason Barney posted his best finish of the weekend with a fourth place result with Sean McClelland fifth.

Dustin Morgan rolled across the line sixth with Tennessee’s Justin Webb seventh. Advancing 10 spots for he CP-Carrillo Hard Charger of the Night, Wayne Johnson was eighth with Matt Covington ninth from 14th. Johnny Herrera made up the top-ten in the No. 45x.

On to Round 6 of Speedweek, the series heads for Moberly, Mo. and the high-banked Randolph County Raceway. Hot Laps begin at 7:30 P.M. (CDT). For continued updates on the American Sprint Car Series, from the National Tour to any of the seven regional tours that make up the over 150 races across the ASCS Nation, log onto http://www.ascsracing.com.