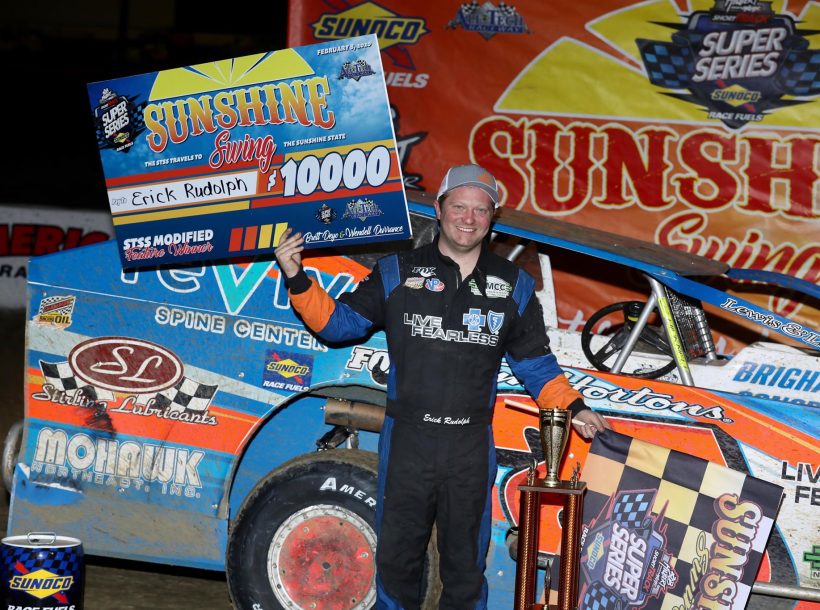 After having strong runs in both feature’s on Friday night, one cut short for mechanical issues, the Ransomville, N.Y., hot shoe powered his big-block powered No. 25R to the front in the final 10 laps to steal the show.

The “Wild Child,” Andy Bachetti raced into turn number one to grab the lead. Billy Dunn, of Watertown, N.Y., and Billy Pauch Jr., of Frenchtown, N.J., followed Bachetti ahead of Watson to occupy the top three spots.

The stars of night one at the ‘Sunshine Swing’ – Stewart Friesen and Mat Williamson – were on the charge again, starting eighth and 12th after the Beyea Custom Headers redraw. The two occupied the fifth and sixth spots, respectively, just five laps into the affair.

Pauch Jr. was challenging Andy Bachetti for the lead until the leaders caught lap traffic. Bachetti was able to open his advantage over the rest of the field until lap 15, when Bachetti spun out negotiating lap traffic.

Billy Dunn would inherit the lead and command the race for the next several laps as several drivers around him went pit-side, including several drivers in the top top-10.

Two drivers taking advantage of the chaos in between yellow flags were Mike Gular and Rudolph.

On lap 32, Billy Dunn relinquished the lead to Mat Williamson, and Rudolph pulled up alongside. That restart however, would belong to Mike Gular. Boyertown, Pa.’s Gular restarted fourth, and drove around Savannah, N.Y.’s Matt Sheppard and underneath Rudolph to take second.

One restart later, on lap 39, Gular would do one better, powering around Williamson to take the lead. Williamson would also lose second to Sheppard before the yellow on lap 41.

The restart that changed the race for good, ensued. Gular and Sheppard washed up the track, and Rudolph drove around Williamson and under the two leaders to take the lead for good.

Rudolph survived the remaining restarts to grab the Sunoco checkered flags. Friesen would climb all the way back to second to grab the Sunshine Swing championship. Mike Gular would hang onto third with Billy Pauch Jr., and Matt Sheppard rounding out the top five.

The Crate 602 Sportsman went 30-laps in distance for a $1,500 payday to round out the ‘Sunshine Swing.’ Cresco, Pa.’s Grant Hilfiger started on the pole and led all 30-laps to win the race and the $500 LKQ North Florida ‘Sunshine Swing’ championship.

Despite challenges from Tony Ballestero and Tim Hartman Jr. throughout the race, Hilfiger held onto the lead for his first career STSS win.

Racing resumes for the STSS on March 6-7 at Delaware’s Georgetown Speedway with the fifth running of the Melvin L. Joseph Memorial featuring the STSS Velocita-USA South Region presented by Design for Vision and Sunglass Central Modified opener (49 laps, $10,049 to win) and STSS Crate 602 Sportsman South Region lid-lifter (25 laps, $1,490 to win) and a host of other divisions. 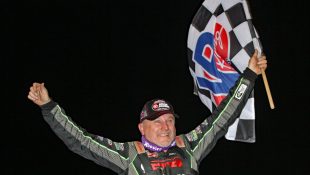